As the first 24 team European Championship goes underway, regular tournament favourites are entering this year’s edition in an unfamiliar position. For the first time in their history, Italy enters an international tournament as underdogs and have on paper one of their weakest squads ever. Midfield generals who played instrumental roles in their successful qualifying campaign are also unavailable this summer. Age and a move to the MLS counted against the experienced Pirlo, while injuries have ruled out Claudio Marchisio and Marco Verrati.

All the above and the fact that Italy were drawn into what is seen as the tournament’s group of death alongside second favourites Belgium, Zlatan’s Sweden and the Republic of Ireland, will not faze Antonio Conte. Conte has developed a reputation as a tactical mastermind that inspires the best out of his players. In his 3 years stint with Juventus, he successfully led the Italian giants back to the summit of Italian football. He is a huge fan of a 3 man defence and generally alters his formations between 3-4-3 and the more conservative 3-5-2. 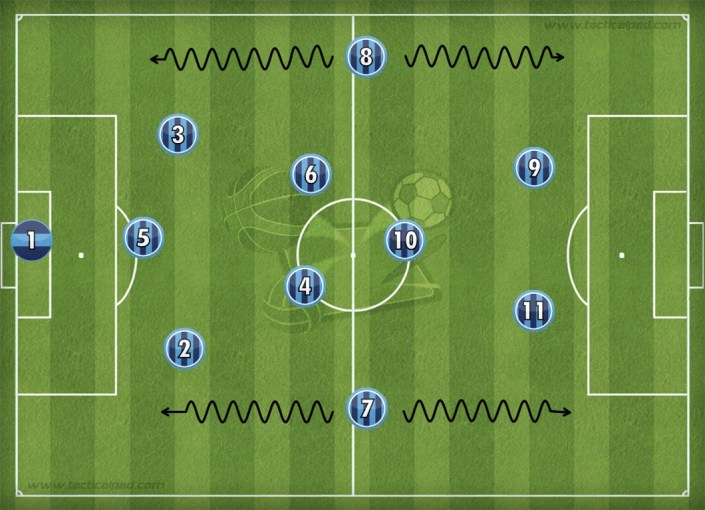 Most famously known in a 3-5-2 formation which was used effectively for the first time by Argentina’s world cup winning manager,  Carlos Bilardo. The success of three man backline is predicated on defensive solidity and tactical discipline. Having three centre backs means that even against a 4-4-2 formation the team will have an extra defender against their opposition’s attack. They are also joined by two wingbacks – deep lying wingers in the modern game – when under heavy pressure. Going forward, having three at the back frees the team’s wingbacks from their defensive duties and turns them into modern day wingers.

After a dismal world cup campaign that saw the Italians eliminated from the group stage and subsequently resulted in the resignation of Cesare Prandelli, Antonio Conte was appointed as head coach for the Italian national team. 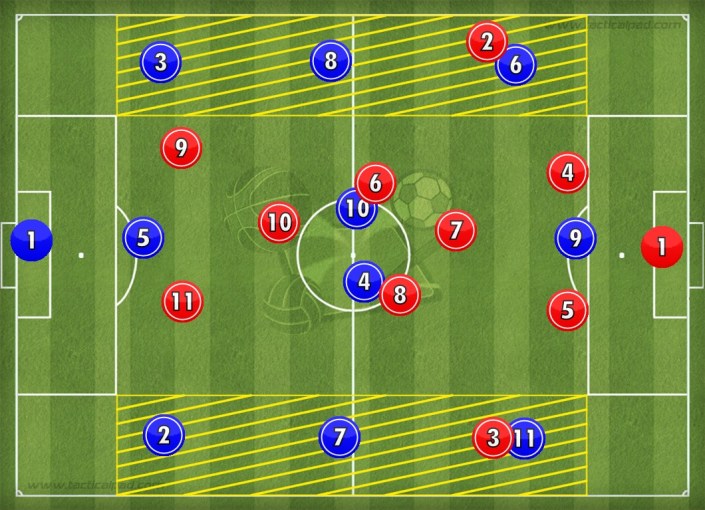 The Italian who as a player was a combative defensive midfielder is obviously tactically influenced by his playing style and can therefore be seen as a manager that favours defensive solidity over an all-out attack approach. He deserves a lot of credit for adapting his tactics to suit the players at his disposal. Successful Italian teams have always been built around world class defenders (Costacurta, Maldini, Nesta, Canavaro) and an influentialtrequartista (Roberto Baggio, Francesco Totti) but the current crop of players is different.

Conte uses three banks of wide players to create to vertical lines on either flank. He uses the vertical lines to free up a wide player in two ways. The first way they utilise the vertical lines is for the wide centre back is to move up with the ball on the flank creating a quantitative advantage in the oppositions half along the touchline. The winger’s primary role is to occupy the opposition’s full back’s attention and draw him away from the line. The wide centre back then plays a vertical pass to the advancing wingback allowing him to exploit the space available from the full back leaving his position.

In conclusion, Conte has found a way to get the best of the current generation of Italian player. The European giants can never be discounted in a major tournament and Conte will try every trick is his tactical workbook to write his name in the history books of Italian football before he embarks on his Premier League journey with Chelsea.

This entry was posted in Tactical Analysis and tagged Conte, Euro 2016, Football, Italy.